In the game, players take the role of Nina Aquila, titular character and proprietor of Aquila Defense & Law, and are tasked with defending several clients accused of major crimes.

In lore terms, NALE S1 uses a mixture of visual and textual cues to give a feel similar to a late-90s, "harshly localised" anime. The story is set within a world where all anime genres can and do exist at the same time.

In addition to the story of each chapter, a longer thread exists that follows Nina as she takes her first steps as a rookie lawyer into a larger world of mystery and intrigue.

NALE S1 is a collected release of Chapters 1-3 in the story, though can be considered a complete experience, as each chapter offers its own satisfying conclusion. These chapters were previously released episodically on itchio, but the Season One game is a much enhanced release, with superior art and many improved features. 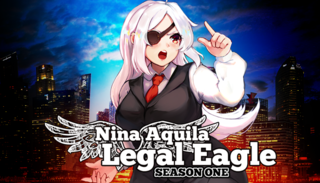